The History of Ophthalmoscope

The History of Ophthalmoscope 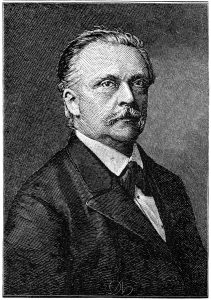 The Ophthalmoscope was invented in 1851 by Hermann Von Helmholtz. He was then professor of anatomy and physiology in Königsberg, Germany.

light from the eye, a discovery made by Bruecke, who would have invented the ophthalmoscope had he only asked himself how an optical image is formed by the light returning from the eye. In his research it was not necessary to ask it. but had he asked it, he was just the man to answer it as quickly as I did and to invent the instrument. I turned the problem over and over to ascertain the simplest way in which I could demonstrate the phenomenon to my students. It was also a reminiscence of my days of medical study that ophthalmologists had great trouble in dealing with certain cases of eye disease, then known as black cataract. The first model was constructed of pasteboard, eye lenses, and cover glasses used in the microscopic work. It was

at first so difficult to use that I doubt if I should have persevered, unless I had felt that it must succeed; but in eight days I had the great joy of being the first who saw before him the living human retina.”

What Von Helmholtz had done was to describe the essential elements of an ophthalmoscope. An illumination source, a reflecting surface to direct light into the eye and a means of correcting out of focus images of the fundus.

The illuminating source was initially a naked candle. Later this was improved by others to an oil lamp and the incandescent bulb when it was invented.

Von Helmholtz used a glass plate reflecting surface and this was improved by others to a plano mirror with a central oveal cut out aperture. Prisms were also tried. Later models changed the plano mirror to concave mirrors thus concentrating light.

The correcting lenses were a slightly later addition in 1852 and took the form of 2 rotatable discs each containing a series of lenses. Later variations had one disc with concave and the other 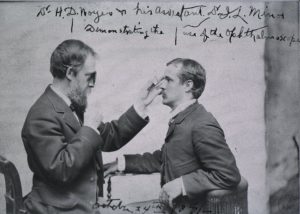 Dr. H.D. Noyes & his assistant, Dr. J.L. Minor, demonstrating the use of the ophthalmoscope. ?1850s. Credits: US National Library of Medicine

convex lenses or even a mixture in the same disc.

In 1852, the indirect ophthalmoscope was invented by Ruete. The observed image of the retina was inverted unlike the Helmholtz ophthalmoscope. A convex lens was introduced between the observers eye and the eye being examined.

The binocular indirect ophthalmoscope was invented in 1861 by Felix Giraud-Teulon, from France. It used a solid rhomboid prism to divide the image and had a fixed interpupillary distance. They were hand held and used as a light source an oil or gas lamp.

Difficulties of using them were only solved in 1947 with Charles Schepen’s design. The Binocular Indirect Ophthalmoscope today is used by every practicing ophthalmologist to examine patients

JAMA 1902 Friedenwald. The history of the invention and of the development of the ophthalmoscope.

Arch Ophth 2002 Keeler.  The Ophthalmoscope in the lifetime of Hermann Von Helmholtz