This article describes the development of cataract surgery from ancient times.

In ancient times, couching was practised as a treatment for cataract.

The mature or white cataract would be dislodged away from the pupil into the vitreous cavity.

Presumably aphakic vision was better than the hand motion or perception of light vision due to a mature or white cataract.

The first recorded description of couching was by an ancient Indian surgeon named  Susruta ( also spelled Sushruta). He lived around 600 BC. Greek physicians in Alexandria are also thought to have practiced couching.

Aurelius Cornelius Celsus from Rome, around 29 AD, described his method of couching.  The patient was seated. A bronze needle was inserted into the eye on the lateral side of the globe and intermediate between the pupil plane and the plane of the temple. The cataract was then depressed downward into the lower part of the vitreous by rotation and movement of the needle.

French surgeon Jacques Daviel introduced the technique of extracapsular extraction in 1748. The surgery is done with the patient seated. The incision into the anterior chamber of the eye is done in the inferior cornea / limbus with a needle which looks very much like a modern day keratome. The same needle is then used to widen the incision and curved scissors are used to extend the wound superiorly on each side to above the pupil level. The cornea is lifted with a spatula and another needle is used to incise the anterior capsule. The spatula is used to elevate the inferior pole of the lens and fingers are used to depress the inferior edge of the wound to deliver the lens. This description still very much resembles the modern technique.

In 1865 Albrecht Von Graefe introduced a modification where the incision was shifted superiorly. The incision was made in the sclera close to the limbus. He designed a knife for this purpose called the Von Graefe’s cataract knife. The upper location meant that the upper lid protected the wound and the wound construction left a smaller gap than the Daviel technique.

About 5 years after Daviel, in 1753, Samuel Sharp a London surgeon modified Daviel’s procedure by using a single knife, using a downward corneal/scleral incision rather than upward, and advocated removal of the lens in its capsule.

Another modification in 1957 to extract the lens in its capsule was to use alpha-chymotrypsin to enzymatically dissolve the zonules (Barraquer, Spain). Freezing of the anterior lens surface and removal with a tiny probe (akin to Cryo-Probe) was introduced in 1961.  (Krawicz, Poland)

In the late 1960s, Charles Kelman introduced the technique of emulsifying the lens material with ultrasound energy and aspirating out the lens material. This was revolutionary because it was a means of removing the lens through a much smaller wound. The smaller wound, as small as 2.2 mm even, results in faster wound healing and less inflammation. Faster recovery from surgery resulted. The technique is still considered the gold standard to this day. 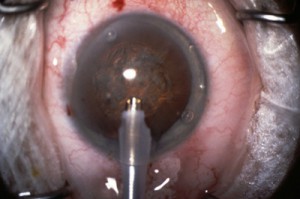