The History of Laser Photocoagulation

The idea of using light to purposely coagulate retinal tissue is credited to German ophthalmologist Gerd Meyer-Schwickerath from Essen, Germany.

He had observed earlier that a retinal scar stopped a progressive retinal detachment. Later, he saw the effects of a solar eclipse on the retina of a student, and then began looking for a way to use light to purposely coagulate retinal tissue.

He experimented with natural sunlight, a heliostat and a carbon arc lamp. Eventually Dr. H. Littman developed the xenon photocoagulator and this was manufactured by Carl Zeiss for him.

The drawback of this technique included long exposure times and large size of the lesions.

Schott in 1964 and Gerd Meyer-Schwickerath and Schott in 1968 presented the results of laser photocoagulation in diabetic retinopathy.

Beetham and Aiello published their series of treatment of proliferative diabetic retinopathy in 1969. Treated eyes did better than the other untreated control eye of the patient. 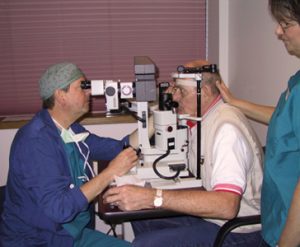